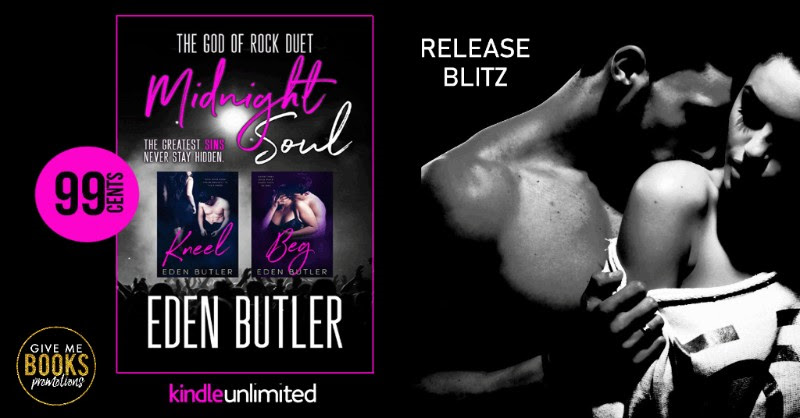 Title: Midnight Soul: The God of Rock Bundle
Series: God of Rock
Author: Eden Butler
Genre: Contemporary Romance
Release Date: August 20, 2018
Blurb
For Iris Dane and Dash Justice, love was a battlefield that left them bloody. They learned the hard way that time heals no wounds – it only leaves them gapping wider.
Now Dash is Iris’s enemy, still doing battle with the one person who loved him most.
The God of Rock duet follows this couple from their first, innocent beginnings, to the fight they wage in front of the world.
This bundle includes:
Kneel:
Dash Justice wrote the songs everyone sings.
His face hangs on every girl’s wall. But Dash wasn’t always a rock God.
Once, he was just Jamie, the boy I loved.
But when my name, sung from his lips promised I was good for only one thing, all sweet thoughts of him die.
Now his excuses mean nothing. His apologies are weak and I’m about to show the world that even rock Gods can be brought to their knees.
Beg:
I am a liar. My words were poison and everything I touched got filthy. Except Iris.
She was the best part of who I was. The only bright spark in my dull, gray world.
But denial made me stupid and a cruel insult destroyed everything I hoped to have with the girl of my dreams.
Now I will crawl on my knees and grovel because sometimes, even rock Gods have to beg.
ADD TO GOODREADS

Eden Butler is an editor and writer of Mystery, Suspense and Contemporary Romance novels and the nine-times great-granddaughter of an honest-to-God English pirate. This could explain her affinity for rule breaking and rum.