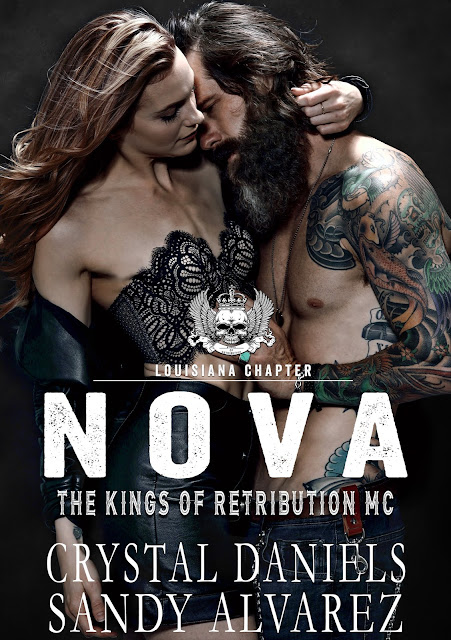 Cain LeBlanc, known as Nova to his brothers, is the Enforcer for the Kings of Retribution MC, Louisiana.
He’s dedicated to the club, but Nova’s entire world revolves around his daughter, Piper. Being a single father doesn’t come without its challenges. Making sure his lifestyle doesn’t affect his home life is one of them.
Never bring a woman home.
That’s one rule Nova has stood by for years.
Until a one-night-stand, with eyes like the ocean, left him wanting more.
After an altercation with another biker, Nova finds himself in trouble with the law. And if the threat of doing time wasn’t enough, Hell rolls into town on a Harley, with a ghost from his past looking for trouble.
Promise Bailey has spent most of her life yearning for acceptance from the only family she has ever known. Which is why she continues to work hard, proving herself as a valuable attorney at her stepfather’s law firm.
Her fiancé commits the biggest betrayal, giving her a new perspective on things, and herself.
Promise realizes her life has become too predictable and mundane.
It’s time for a change.
With the support of her girlfriends and a little whiskey, Promise lets her hair down for a night out to celebrate her newly single status.
One night.
No inhibitions.
No names.
That was all she wanted from the smooth-talking bearded man sitting at the bar. And the stranger was more than willing to deliver.
Little did Promise know she was going home with a member of the local motorcycle club, and how one night of unimaginable pleasure would change her life forever.

A Little About Us:

We are sisters Sandy Alvarez and Crystal Daniels. Since 2017 we have co-authored and published eight books in The Kings of Retribution MC Series – Undaunted, The Darkest of Light, Finding Solace, Defy ,Unbreakable, Lost King, Prospect, and Riggs – The Kings of Retribution MC-Louisiana Chapter.
Other books written by us include , Demetri The Volkov Empire, Leather and Mistletoe Novella, and Love above Law.
When we are not writing you will find us spending time with our families or curled up with a good book. 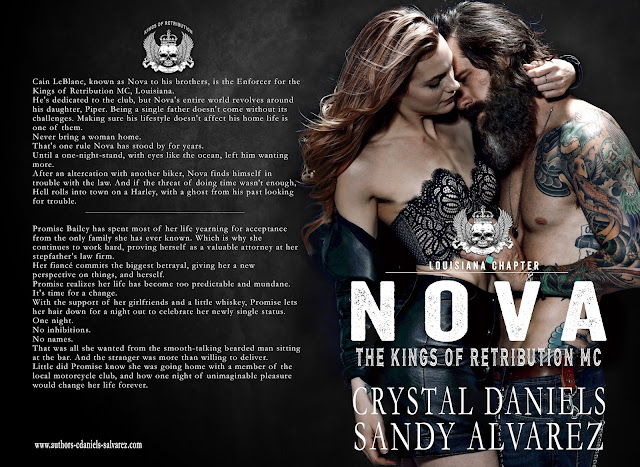