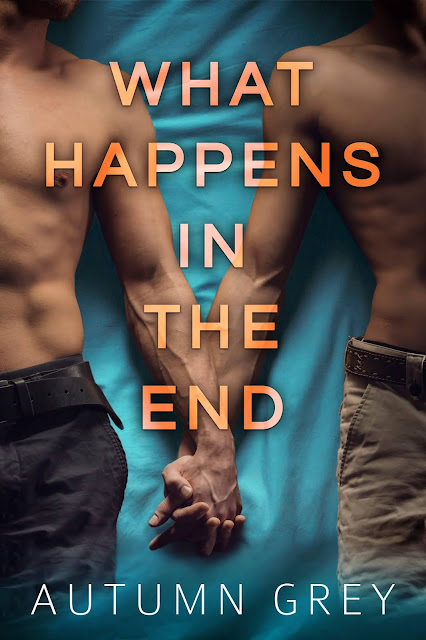 Title: What Happens In The End
Series: Blue Oak Bay #1
Author: Autumn Grey
Genre: M/M Contemporary Romance
Release Date: May 26, 2022
BLURB
The truth will set them free…or ruin them completely…
He may only be seventeen, but Mason James has enough romance-inflicted scars to last a lifetime. So, when his family relocates to a small town in California, he’s more than ready for a fresh start. And this time, he’ll stay far away from boys who aren’t out of the closet. But all it takes is one look at his charming new classmate to make him reconsider everything…
Asher Turner is a master at hiding his true self. Behind every smile lays the fear of being outed for who he really is. He’s learned—the hard way—that letting anyone into his heart can only end in pain. He knows he should stay away from the quiet, intense boy at school. But…he can’t…
Their demons threaten to keep them apart. Their attraction (and maybe fate) throws them together again and again. When all is said and done, will love be their salvation, or their downfall?
What Happens in the End is a sometimes sexy, sometimes angsty, always emotional, MM, contemporary coming-of-age romance. Happily ever after guaranteed. Preorder today and get ready to experience first love all over again.
ADD TO GOODREADS 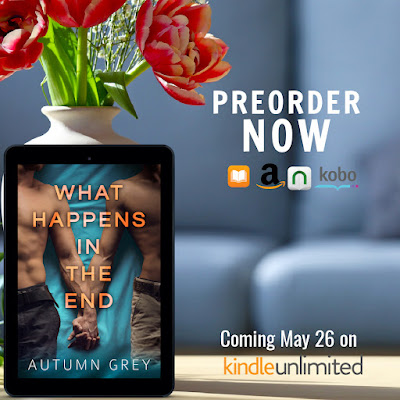 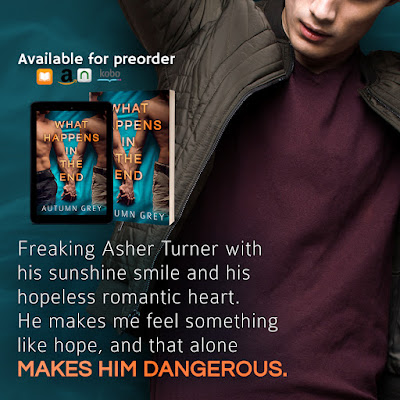 EXCERPT
I walk down the hallway with my head bowed, looking through the shots I took yesterday on my camera. Suddenly, I bump against a hard wall of muscle. The camera slips from my hands, and I hurry to grab it before it crashes on the floor. My efforts are in vain, though, as I miss it by mere inches and only have time to watch in horror as it makes its descent toward the ground.
I’m about to let out a string of curses, when a large hand snatches the camera before it hits the floor, effectively saving me a couple hundred dollars for a new one.
I straighten. “Thank fucking god,” I mutter, closing my eyes in relief. “Nice reflexes, man.”
“Thanks,” a gravelly voice says, but the words hold no warmth. My gaze jerks up, my breath getting stuck at the bottom of my throat as I inhale Asher’s scent. My eyes meet his brilliant blue ones. He takes a step back, frowning down at me. “You need to look where you’re going.”
“Sorry, I was checking out my shots.” I shrug, glancing at my camera still clutched tightly in his grip. “Can I have that back?”
Ignoring me, he asks, “Mason, right?”
Damn, that voice. It’s like he’s trying to make me hard on purpose.
I raise a brow, hoping my face doesn’t show how much his presence affects me. “Last I checked, yeah.”
His two friends, Sig and Adam, are nowhere in sight. Strange, considering they’re usually glued to his side. I’m about to make a snarky comment about it, but he speaks up first.
“Listen, I don’t know what happened between you and Addie yesterday, but I know she can be pretty nosy at times. For what it’s worth, I’m sorry for whatever she did.”
I shrug. “It’s cool.”
I finally take him in. His hair is damp; some locks are curling around his forehead and others at the nape of his neck. He’s wearing a pair of running shorts and a white T-shirt showcasing his pecs and toned arms. He probably just came back from his morning practice. God, he looks so hot. He drags his fingers through his hair, and I feel myself grow slightly hotter than I’d like.
I stare pointedly at the camera just to focus on something else, because my dick is getting hard and I notice that the image on the screen is one of the pictures I took of him. If he was to look, he’d assume…
Shit.
He follows my gaze, and I hear him inhale sharply.
“What the fuck?” he mutters under his breath as he brings the camera close to his face and flips through the pictures. After what seems like ages, he stops and looks at me, anger and confusion showing on his features. “Why the hell do you have a bunch of pictures of me on there? And don’t tell me you photographed the whole team. I’ve seen the pictures, and I’m the only one on there.”
My neck heats up as I stumble around for a valid excuse to give him, but each one sounds just as bad as the previous.
When I don’t answer, he says, “This shit is fucked up, man. Has anyone else seen these?”
For some reason, I feel the urge to goad him and see how far he can go before he snaps. Maybe because he’s making me feel vulnerable and I want him to feel the same way. “They’re only pictures, Asher. Of you, yeah, but get over yourself. It’s not like they mean I want to fuck you or something.”
His reaction doesn’t disappoint.
His eyes widen in horror, his mouth opening, then quickly closing. His gaze darts around the hallway rapidly, as if worried someone might have heard my words. Then he quickly steps forward and dumps the camera in my hands like it’s burning him. The tips of our fingers brush for an instant, and Asher leaps back as if he touched a live wire.
His lips curl in a sneer, and I can’t tell whether it’s in anger or disgust. “Do me a favor, Mason. Keep your fucking lens away from me.” Then he spins around and stalks down the hall.
I stand there, rooted to the spot, disappointment stabbing deep within my gut. I can feel the wall I’ve carefully built around myself crumbling a bit. An invisible barrier that was meant to keep me from being hurt. But, fuck if Asher’s reaction didn’t hurt like a bitch. He looked at me as if being gay was disgusting.
I toss the camera back into my bag and head for my pre-calc class. 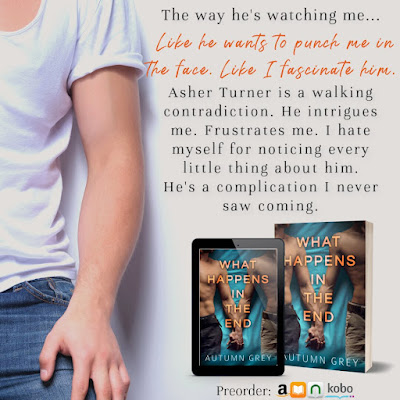 AUTHOR BIO
Autumn enjoys writing angsty romance, featuring flawed and quirky characters and hard-won happy ever afters. When she’s not working as a nurse assistant, you’ll find her behind keyboard writing stories, or curled up on the couch with a book. Her work has been featured in USA Today’s Happy Ever After.
She lives with her two children and one fur baby, enjoys good wine and binge-watching TV shows whenever she can.
AUTHOR LINKS
GOODREADS
FACEBOOK
FACEBOOK GROUP
INSTAGRAM
TWITTER
WEBSITE
NEWSLETTER